The Simple Basics of Pruning — pruning as an art form.

Growing a plant is one thing.  Shaping plants well is an art form and adds another dimension.  Here is an article that tells you what happens when you prune.  This information applies to just about any kind of shrub or tree.  I am asked lots of questions about pruning.  This article will be the first of a series on pruning practices and techniques.

I am using a jade plant for pictures because the buds show up well.  The jade tree is also really good for an indoor bonsai.

To start with, look at the tip of a stem and notice the small growth bud.  This is called an “apical bud”.

At the side of the stem, just where the leaf comes out, you…

Friday night was one of my gather up’s of friends to play with trees. We had six on the night, a few no shows due to the sunny day it turned out to be. Who could blame them. The rest of us got on with it.

Stepehn brought this Jasmine. Still pretty much raw material that had struggled last year after a repot. This year was he first it had flowered after collection from a garden. You can notice in the photo of it’s trunk below that there was some white fungus starting on the bark. This was a dead patch which was removed to create a shari. More on this in a later post, or maybe even on Stephen’s own blog, but I doubt it 😉 Stephen caught in one of those curious moments lol Brian, new to bonsai, came along. He had a bad experience with a Chinese Elm and I… 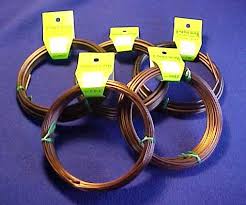 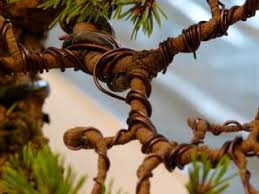 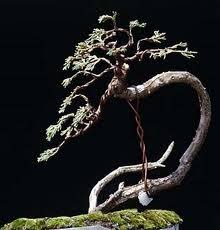 How to prune and reshape an overgrown bonsai tree

I started a bonsai for Micky about twelve years ago by cutting up a dwarf procumbens juniper and potting it in a clay saucer. I think the last time I pruned it was about five years ago. It was one of those things I kept meaning to get around to and didn’t.  So, the other day, armed with my pruning shears, a pair of scissors, and a cup of Micky’s good coffee, I tackled the job. Here’s what the plant looked like:

The first step is to look inside and see what the trunk looks like. I was pleased to see that the lower portion of this trunk was covered with moss.  I looked for unwanted growth and dead stuff. I found it, too.